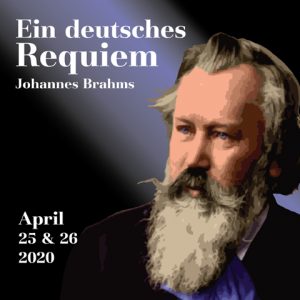 We regret that this concert, originally scheduled for April 2020, has been cancelled in light of the covid-19 pandemic. Although this is disappointing news for all of us, the health and safety of our performers and audiences is our first concern. We plan to reschedule it in April 2022.

Melodious and sumptuous, Brahms’s  Ein deutsches Requiem, Op.45 (A German Requiem) is not a lament for the dead, but a message of comfort and hope for the living, unique in choral history. We are excited to present this masterwork in collaboration with the Bainbridge Symphony Orchestra and soloists Charles Robert Stephens and Janeanne Houston.

Mr. Stephens has been hailed by The New York Times as a baritone of smooth distinction. In his two decades in New York City, he has sung several roles with the New York City Opera and on numerous occasions at Carnegie Hall.
Based now in Seattle, Mr. Stephens has sung as soloist with the Seattle Symphony six times and is very active with orchestras throughout the Pacific Northwest, including the orchestras of Tacoma, Spokane, Bellingham, Walla Walla and Yakima.
He is on the voice faculty at Pacific Lutheran University and teaches privately in Seattle.

Soprano Janeanne Houston is a versatile performer, and one of the Northwest regions busiest artists. Her extensive repertoire
spans the Baroque era to the present. She has worked under the
batons of many fine conductors including Gerard Schwarz, James
DePreist, Sidney Harth, Dean Williamson, Richard Sparks, Christophe Chagnard, and Miguel Harth-Bedoya. Concert works that she has performed many times include Carmina Burana, Messiah, Requiems of Brahms, Verdi, and Mozart, and Mozart’s Mass in C Minor. The managing and founding member of Northwest Artists and the recording label Elmgrove Productions, she has been a member of the voice faculty at Pacific Lutheran University since 1989.

Listen to the Bainbridge Chorale singing the opening section of the Verdi Requiem in performance on April 13, 2014

The Bainbridge Chorale mission emphasizes bringing together people from all walks of life through the power of music. Take a look at what some Chorale members do for their day jobs, as they sing along to Sisi Ni Moja (We are one).

View a Chorale singer and Director Michael Miller speak about the value of the Chorale to its singers and its community.